The Case of Jasmine and the “Yeah But” Solution

Procastination in the Face of Tough Decisions

Jasmine (not her real name)  had been the director of a unit on the campus of a nonprofit university for less than two years.  Over the last year, two department  managers retired when Covid-19 expanded, and had not been replaced. Work had been redistributed “temporarily”  six months ago while she delayed in recruiting for replacements because, “it is so hard to hire virtually when we usually operate face-to-face.”

She then learned that the university budget, and therefore her budget, would be cut in the coming year, making replacement of both of  those positions difficult to impossible to achieve.  She was also hearing rumblings that the remaining department managers felt that it was not “fair” to burden them with the work of the departed department heads without any adjustment to position or pay. Pay raises weren’t an option.

With budget decisions coming in a few months, Jasmine knew she had to do something. But she did nothing. She found the chain of events to be personally demoralizing and paralyzing.  She envisioned productivity diminishing, staff becoming angrier, unit performance deteriorating, campus clients complaining. She feared she would eventually be demoted or lose her short-lived leadership position all together. She found her stress level increasing, along with the catastrophes she could imagine were coming.

According to behavioral science research, it is not the event that causes procrastination or inertia, but our perceptions and thoughts that then create an emotional response to the event.

The following diagram illustrates the cycle:

Jasmine was certain that no matter which way she turned, the outcome would be a catastrophe.

Jasmine usually prided herself on being an effective and independent problem-solver. She could generally look at all sides of a situation, make a decision and move on without second-guessing herself. But she was getting nowhere with the current dilemma. Finally, as budget discussions got closer and closer, she swallowed her pride and contacted a coach a friend had mentioned over a year ago.

Jasmine’s coach explained the cycle to her, found out how she preferred to solve problems, and at Jasmine’s request, suggested a number of approaches they could use to help Jasmine take effective action.

The exercise Jasmine chose is designed to shift  thinking to what we want, away from  what we don’t want. The effect is a paradigm shift from problem analysis to goal analysis, according to researcher and author Fredricke Bannick.

The Yeah But Solution

The steps to this exercise are: 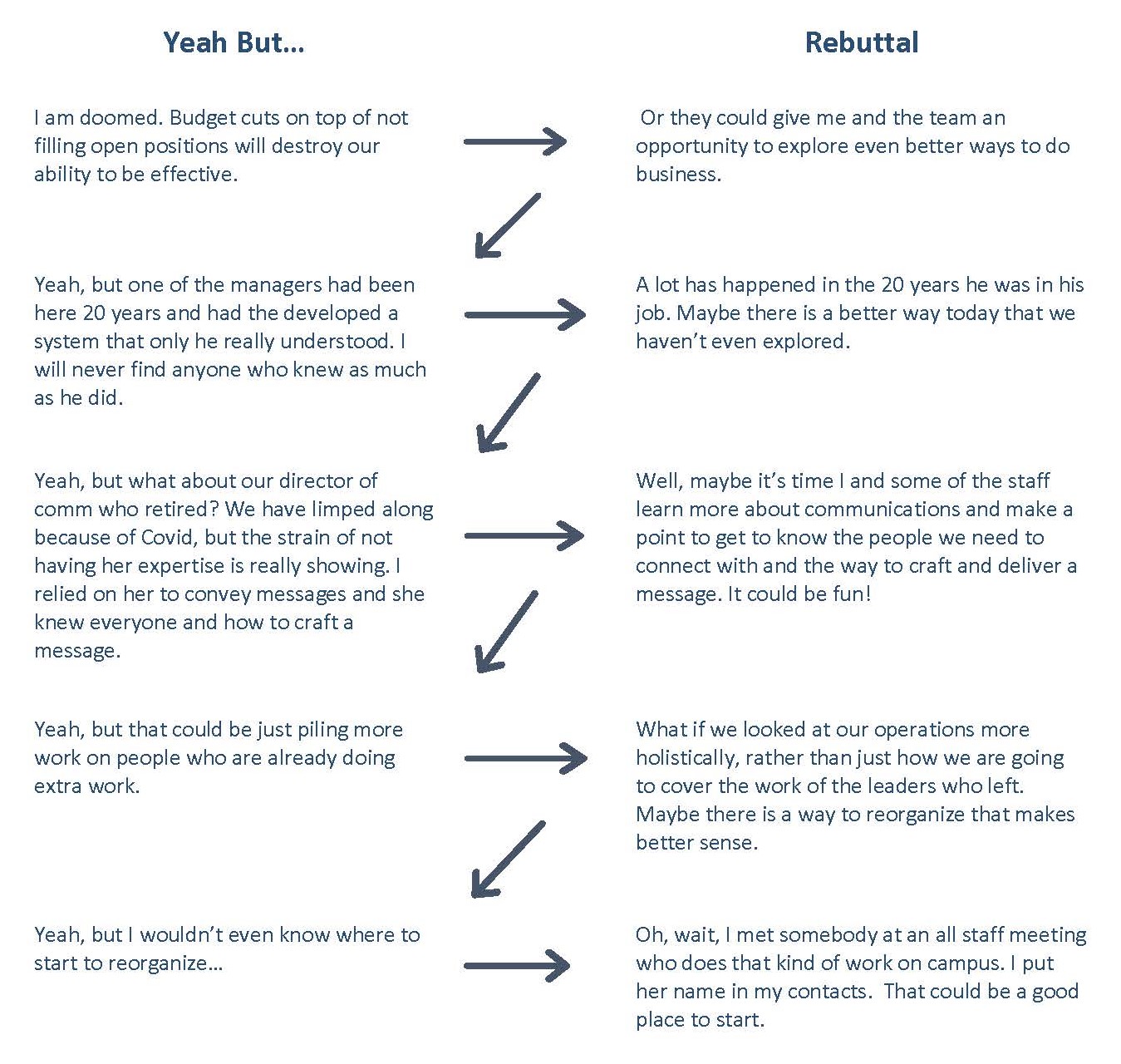 This Exercise Works When Teams Are Stuck

After initially having great difficulty rebutting her yeah buts, Jasmine found it easier. At a certain point, she said she felt a release of the tight hold her mind had on catastrophe. Following the exercise, she contacted the change consultant she had met at the staff meeting. The consultant then helped Jasmine and her team map out strategies to move forward.

This exercise also works with teams when they are stuck. Half of the team provides the excuse for not moving the other half rebuts. After three rebuts teams switch roles so everyone gets to view both sides. Teams continue until they have addressed all “buts” and are ready to scope out a plan.

When we find ourselves catastrophizing, or even just caught in  thinking of negative outcomes or problems to be solved, this exercise is a reminder that our thoughts are not facts and that we can control our thoughts. That we have the ability to change the channel of our thoughts and emotions from problem-focused to goal-focused, which then sets us up for forward momentum.